Wallace, NC (June 25, 2019) – After two beautiful days at River Landing, the teams have finished play at the 2019 CPGA Pro-Assistant Championship and a winning team has been crowned.

Following the first round, two teams were tied for the lead after posting an incredible four-ball score of 10-under par, 62 on the Landing Course. Brad Luebchow & Luke Lovell turned in a clean card with 10 birdies and 8 pars. The team of Chris Haarlow & Kirk Mitchell also turned in a clean card, including an eagle on the par-5 13th hole. The defending champions of Adam McLaughlin & Matt Brennan finished the first round only two shots back at 8-under par, tied with the team of Clark Rose & Neal Lancaster, still in contention going into the final round on Tuesday. 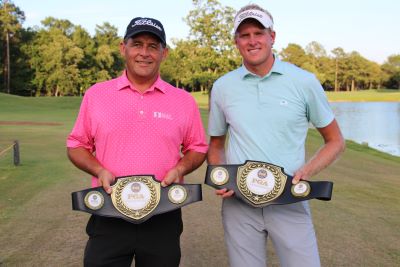 The Champions from the 2019 Pro-Assistant Championship were Chris Haarlow, of Precision Golf School, and Kirk Mitchell, of May River Golf Club – Palmetto. This duo defeated Chase Godwin and Louise Olsson from Kiawah Island – Cassique in a two-hole playoff after both teams finished the 36-hole event at 15-under par, 129. Godwin and Olsson shot a stellar 9-under 63 in today’s round to propel them to the top of the leaderboard. The winning team of Haarlow and Mitchell held strong on their position at the top of the leaderboard from the first round and turned in another bogey free card following today’s round of play. Only one shot back from these two teams was the Bald Head Island Club duo of Brian Stewart and Nicholaus Beecroft who shot 8-under in today’s round to finish their 36 holes at 14-under par.

There were multiple closest-to-the-hole competitions on all par threes during the event, thanks to the support from our various partners. During the first round, Stuart Shearin earned $150 from Yamaha for his team when he hit his shot on the par-3 11th hole to 2’. John Faidley hit a stellar shot that was hunting the flag the whole time it was in the air to 1’4” on the par3 5th hole earn $100 for his team from Junior Golf Hub. Joe Kreuser hit another tight shot to win $100 from Kirk & Matz for his team to 1’11” on the 16th hole. Round two was just as exciting as Brian Stewart, of Bald Head Island Club, Derek Watson, of Pawleys Plantation, Ryan Fuller, of Randy’s Golf Center & Ran, and Luke Lovell, of Kenmure Country Club all won their respective closest-to-the-hole competitions bringing home cash prizes.

The teams were also competing to earn skins during both rounds. In the first round, only one skin was won by the defending champions, Adam McLaughlin & Matt Brennan who holed out for an eagle on the par-4 first hole. McLaughlin/Brennan won $820 for their great hole. In round two, there were three skins won by Barry Pierce/ Adam Szoke, Larry George/ Jeff Hale, and Brian Stewart/ Nicholaus Beecroft. Each of the three teams took home a prize of $273.

On Sunday evening, the annual Crown Royal Putting Challenge was hosted with a twist from previous years. The contest was moved inside the clubhouse with five exciting and long mini-golf holes used for competition. One hole included the elevator and another included a few bounces down the stairs to get back to the start. After six teams played off in the shootout, the Providence Country Club team of Kevin Reardon & Fergal O’Shea came out victorious, winning $120 for the team, a bottle of Crown Royal and a glass from Kirk & Matz each for their stellar performance. Click Here to view the Results of the Crown Royal Putting Challenge. The Monday night “Pool Party” was also moved to the clubhouse but that did not stop the annual excitement hitting glow balls for competition. With a great meal, engaging education, and light-hearted commentary, players were excited to hit from the balcony of the clubhouse across the river to various targets. After plenty of great shots, the Kiawah Island Club team of Dylan Thew & Rupe Taylor finished with the most points for the evening.
Click Here to view the Results of the Chipping Challenge. This exciting team event would not be possible without the support from our generous partners. This year’s championship is presented by Yamaha Golf Cars, Greg Norman, PING, and Four County EMC. The event is supported by Kirk & Matz, Evolve Golf, Golf Genius, and Junior Golf Hub. Thanks to the many company representatives that have come out for the event!

We are also incredibly thankful for the hospitality from Larry George and his entire staff at River Landing. This is the seventh year that they are the host club and are always great to work with!

The CPGA also thanks each of the presenting and supporting partners who are helping make the event a success.

About River Landing
Astoundingly great golf is just the beginning…

The coastal plains of North Carolina are the beautiful setting of a community where beauty and lifestyle go hand and hand—River Landing.

River Landing is a private, gated, residential golf community covering over 1,700 unspoiled acres on the banks of the northeast Cape Fear River in Wallace, NC.  An easy 35 minute drive from historic Wilmington and just an hour and 15 minutes south of Raleigh, NC, we represent the best of North Carolina’s beauty, weather and recreation.  And the cost of living here?  Very attractive!

Our championship golf courses are world-class, and are complemented by our state-of-the-art Sports and Fitness Center.  Here residents enjoy secure surroundings featuring scenic walking, hiking and nature trails, mature, lush landscapes and some of the nation’s best fishing, boating and gardening.

River Landing offers the lifestyle you deserve with the value you demand.  Welcome!

About the Carolinas PGA Section
Established in 1923, the Carolinas PGA Section of the Professional Golfers’ Association has grown to be the largest of the PGA’s forty-one sections with over 2,000 professional members. The Carolinas PGA Section embraces North and South Carolina, as well as a small portion of southern Virginia, with more than 550 golf facilities. The Carolinas PGA is dedicated to nurturing and improving the quality of the game for the thousands of golfers using its member facilities. PGA professionals are responsible for conducting a variety of golf-related functions, which include human resource management, golf shop merchandising, golf instruction, tournament operations, junior golf programs, growth of the game initiatives, golf club repair, administering the rules, public relations and much more.  For more information, please visit www.carolinas.pga.com. You can also find the Carolinas PGA on Facebook, Twitter, Instagram, LinkedIn, and YouTube.

For more information, contact Sally Morgan, PGA, Director of Marketing at 336-398-2675 or smorgan@pgahq.com.